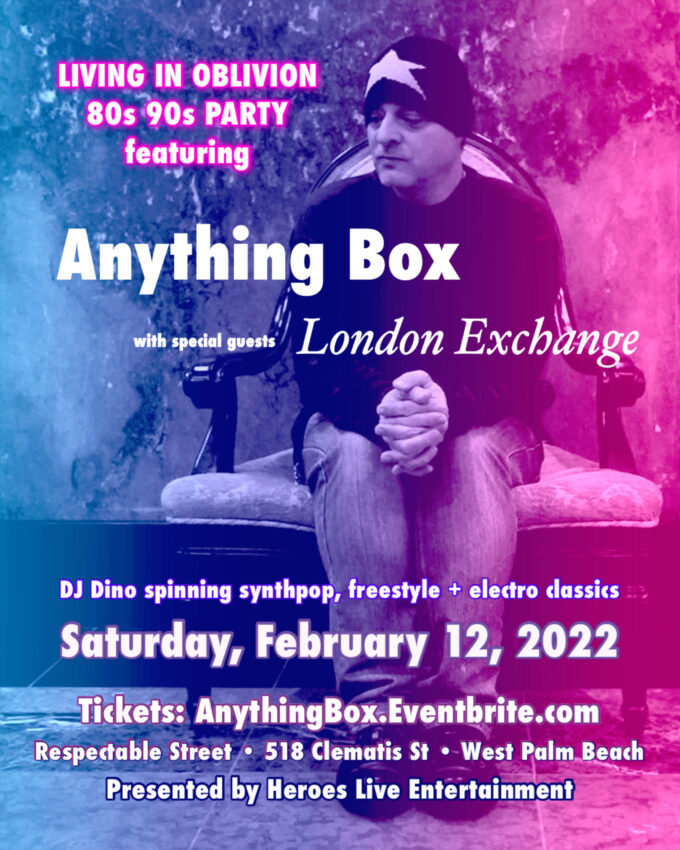 Formed in 1986 by Claude S. with two friends, Dania Morales and Paul Rijnders, the New Jersey trio Anything Box took their name from the title of a book of short stories. The act signed with Epic and released its debut album, Peace, in 1990, notching a hit with the upbeat “Living in Oblivion.” The song crossed over from clubs (Billboard Dance #10) and managed to climb onto the pop charts (reaching #65). They returned a year later with their second album, Worth produced by Gareth Jones (Depeche Mode, Einstürzende Neubauten, Wire, Erasure). With a current lineup consisting solely of Claude Strilio, Anything Box continues to incorporate more and more influences into its electronic pop framework.
Website: https://anythingbox.com
Facebook: https://facebook.com/endpop
Twitter: https://twitter.com/endpop
Instagram: https://instagram.com/endpop

Formed in 1988, London Exchange brought together elements of New Wave, Dance, and Freestyle. Inspired by groups like Information Society, New Order, and Depeche Mode, London Exchange was one of the pioneering bands of retro EDM that was taking off in the US & Europe in the late 80’s and early 90’s.

Touring the nation & worldwide exposure has made this band a staple of electro-pop-styled music on the radio and the dancefloor since their debut in 1988!

DJ Dino of Synthology 101 will be spinning synthpop, freestyle, and electro classics.