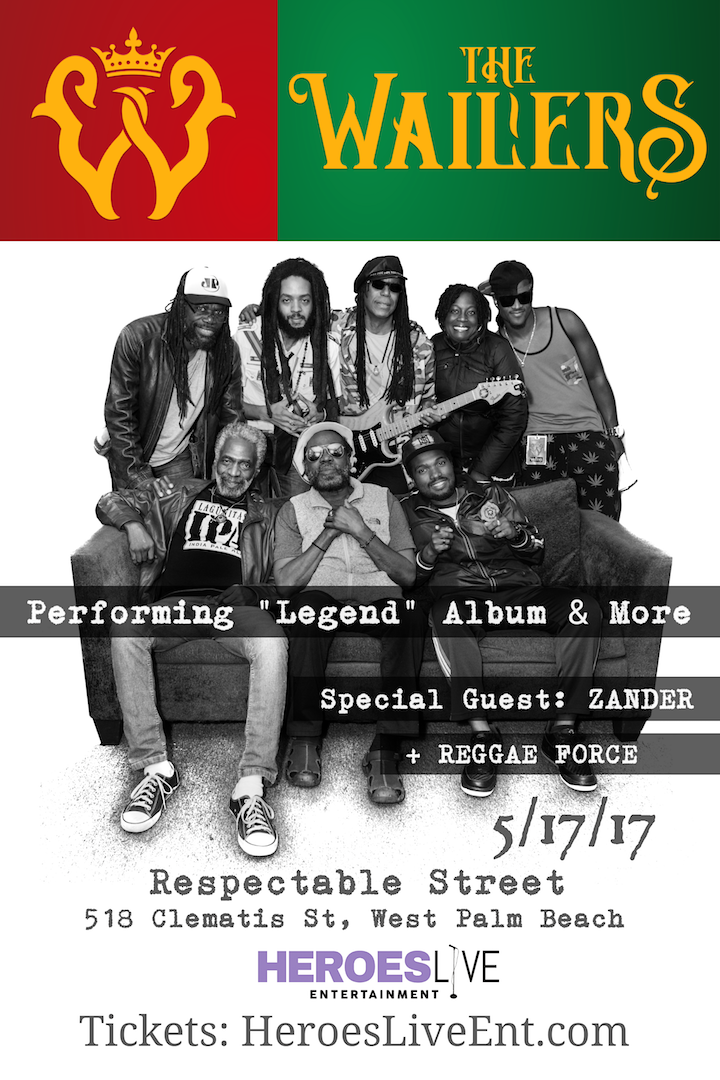 The legendary Wailers band returns to bring its revolutionary sound to fans around the world. Steered by famed bassist and founder Aston “Familyman” Barrett, and joined in solidarity with original Wailers’ guitarists Junior Marvin and Donald Kinsey, The Wailers continue to make musical history.

From 1973 to 1980, Bob Marley & The Wailers recorded, toured, and performed before countless millions worldwide. Since 1981, Familyman and Junior have carried on the mission to “keep The Wailers together,” just as Bob requested, affirming: “By doing that, you keep me alive through the music.”

In tribute to the late co-founder and drummer Carlton “Carly” Barrett, The Wailers present Aston Barrett, Jr. on drums. It’s startling how the young powerhouse delivers in his uncle’s inspiring landmark style. Lead singer Joshua David Barrett is a Rastaman by lifestyle and culture. Josh delivers Bob’s powerful message of Jah love and unity through his performance and interaction with the audience.

Also on stage are singer Shema McGregor, daughter of I Three Judy Mowatt; Owen “Dreadie” Reid on guitar/bass; and Javaughn Bond on keyboards. The performance anchor is engineer Dennis Thompson, the man responsible for The Wailers sound in stadiums, clubs, and studios throughout the ‘70s.

There are more than 250 million Bob Marley & The Wailers recordings sold, including 1977’s Exodus, anointed Best Album of the Century in 1999 by Time Magazine, and “One Love,” named Song of the Millennium that same year by BBC. Spin Magazine listed Bob Marley & The Wailers at #4 of the “50 Greatest Bands of All Times,” while The New York Times named Bob Marley the most significant musician of the 20th century. These accolades were made possible by the creative, timeless, and distinctive music, lyrics and production by these incomparable Wailers musicians.

Singer, songwriter Zander’s musical journey began with classical piano at a young age. His guitar came later and has never left his side. Inspired by surfing in Florida and fiery sunsets, Zander’s music vibrates with intense beats and positive energy with reggae, funk, pop and rock in the mix.

Zander’s music pulls from an international background with Irish and Latin American flavor. His vision is eclectic, and his music and performance are full of color and energy. Zander has opened for many acts such as Ziggy Marley, Weezer, Train, Fall Out Boy, Dirty Heads and The Wailers.

Zander’s career started with The Crazy Carls in 2009 as lead singer, songwriter and guitarist. His solo career was launched in 2015, and fans are ready for his debut album to be released this year. Gigs in the US, Latin America, and Europe will be scheduled for late 2016.

Junior Jazz – Vocals & Guitar
Junior Jazz (Wendel Ferraro), Montego Bay, Jamaica, West Indies. Ferraro was nicknamed Junior in his early years and, inspired by his love of jazz, added the name of his favorite musical genre to complete his moniker. His early musical influence and experience was gleaned while performing in his local church choir. He met producer Lennie Hibbert who helped the young singer to polish his musical skills, although the duo did not record together owing to Junior Jazz’s resettlement in New York, USA. On his arrival in the Bronx, Junior Jazz’s connection with Hibbert resulted in him being recruited to accompany visiting Jamaican artists including, Beres Hammond, Gregory Isaacs, Judy Mowatt and the Mighty Diamonds. While supporting the cream of Jamaica’s recording industry Junior Jazz resolved to perform in his own right and formed his own local reggae band. In 1991, as a soloist, Junior Jazz recorded the George Benson hit, ‘The Greatest Love Of All’, which was featured on a Japanese reggae compilation. His interpretation of the song proved especially popular in the Far East. Through to 1997 Junior Jazz developed his career by performing at the renown S.O.B.’s nightspot, where a representative of Vincent Chin invited him to record his album debut. The release resulted in him being nominated in four categories at the Tamika Reggae Awards and global touring alongside artists such as Bunny Wailer, Buju Banton, Beenie Man and Shabba Ranks. Junior served as musical director/guitarist for Diana King. Junior also tours with world famous Monty Alexander. Junior is now the singer/guitarist for Reggae Force.

Aston “Familyman” Barrett Jr. – Drums
Aston Barrett Jr. Is The Son Of The Legandary Aston “Family Man” Barrett (Bass Player Of The Wailers), Nephew Of The Late Carlton “Carly” Barrett (Drummer Of The Wailers) – The Originator Of The “One Drop Riddim”, And Grandson Of The “Father Of Reggae” The Late Joe Higgs (Mentor Of Bob Marley)…
He began showing a serious interest in music from the age of six. With music around him all the time from a young age, he was destined to be drawn to it.
He plays a number of different instruments, but the bass guitar is his passion – following in the footsteps of his father. He taught himself how to play the bass, just from watching his father in action whether in person or sometimes from watching video tapes of the wailers live performances. He now is representing Carlton Barrett, his uncle on the drums with Reggae Force. His uncle has passed on & he is very serious in keeping his memory alive while playing with Reggae Force & also the Wailers with his father.
He is also part of BAD Lions Productions, LLC. He can be heard on numerous tracks for many artists, playing just about every instrument.
He currently plays drums for Reggae Force, bass, organ, & drums for the Wailers, bass & guitar for Julian Marley, bass for Lauryn Hill, & can be heard on Stephen Marley’s album playing drums on two tracks.
He believes in the roots sound & feel of the Wailers & will carry on his family’s legacy for future generations…
“I HAVE AN EAR FOR MUSIC. MUSIC IS IN MY BLOOD. I WAS BORN FOR MUSIC. I LIVE FOR MUSIC.”

Alaina Reed
Alaina Reed started playing reggae music about 10 years ago when she fell in love with the sound & message of Bob Marley & the Wailers & especially the bass lines of Aston Familyman Barrett. Since that time she spent countless hours submerging herself in Jamaican culture & music. She has had the pleasure to work with such great artists like the Abyssinians, the Melodians, Leroy Sibbles, Tanya Stephens, Mikey Dread, Red Fox, Everton Blender, Wayne Stoddart, Troy Genius, Red Rat, Causion, Maurice Gregory, Gubu Coparchy, Squidly Cole, & many others… She is currently the bass player for Reggae Force Band. She has had the honor of learning from some of the legends of reggae music including, Leroy Horsemouth Wallace, Earl Chinna Smith, Benbow Creary, Dave Richards, Brian Fontenelle, Junior Jazz, Chris Meredith, Squidly Cole, & of course Aston Familyman Barrett Jr.
She has built a recording studio & is now starting a full production company with exceptionally talented business partners, Aston Barrett Jr., Brian Fontenelle & Dave Richards – BAD Lions Productions, LLC.
Other than reggae music, she has a passion for riding horses, training dogs, yoga, Wing Chun Kung Fu, ballet, Zumba & all things healthy & positive…
Feel it in the one drop… And free the people with music…

Peter (Sprangy) Williamson
Veteran keyboardist, Peter (Sprangy) Williamson has played for almost all of reggae’s top singers. He was born in London, England in 1963, migrated to Jamaica in 1965, & then to the U.S. in 1969. At the age of nine, he received classical music lessons for one year. After graduating from H.S., he joined his brother’s band “Exodus Supreme”, touring northeast America & opening for acts like Third World, Ziggy Marley and the Melody Makers and Steel Pulse. They also worked with artists like Roland Alfonso, Fred Locks, Apple Gabriel, Delroy Wilson, & Tyrone Taylor to name a few. Then in 1989, he moved to South Florida and started working with a band named “Jahapostles”. The band moved to Jamaica in 1990 to work with Garnett Silk. After touring on and off for about five years, they moved back to U.S. in 1995. Since that time he been touring & performing with reggae music greats including Gregory Isaacs, John Holt, Leroy Sibbles, and so many more… He is now the keyboardist for Reggae Force holding down the position with his unique style & sound…