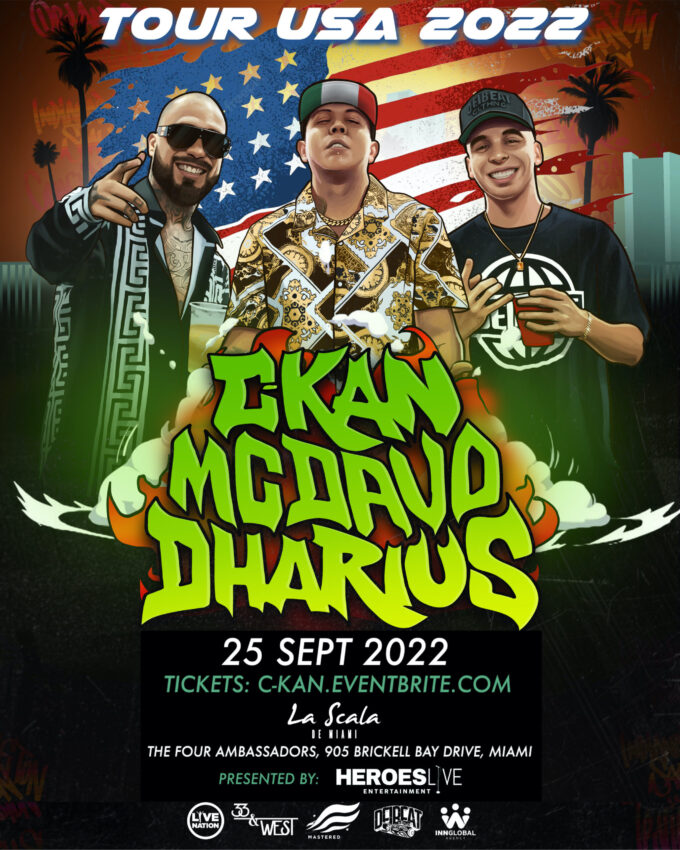 Heroes Live Entertainment presents C-Kan, MC Davo, and Dharius @ La Scala de Miami on September 25, 2022. One of the most important exports from Mexico, and a legend in the Latin Hip Hop scene. First-ever Miami show!

With seven studio albums, three more with various artists, one as a  duo, and six independently,  C-KAN  has built one of the most solid careers in the Spanish-language rap scene in Latin America. Influenced by bands and rappers such as Cypress Hill, Control Machete, and  Vico C, C-KAN  began making his first improvisations which he recorded on cassette at the age of  14. In December 2012, as a soloist, he released his first studio album, “Voy Por El Sueño De Muchos’ ‘ which quickly positioned itself at number 1 in sales on iTunes  Mexico. By  2014  he released his second album, “Clasificación  C ” Vol. 1, where he excelled in collaborations with international artists such as MC Magic, Sporty Loco, T Lopez, Pipo Ti, and  Lil  Rob. As a result, the album entered the  Billboard charts and reached position 42, becoming the first album by the rapper to position himself on this list. In 2016, his success continued to escalate, and he shared the stage with world-class artists such as  Rihanna,  Coldplay, and Lil  Wayne at Budweiser’s Made in America Festival. C-KAN has also participated in major international events such as SXSW in Texas, ‘High Time’s Magazine’s Cannabis Cup’ in Los Angeles, El Tri’s 50th anniversary in Mexico City, and was a special guest at Roc Nation’s ‘Yandel Dangerous Tour’ in California.

David Sierra Trevino, better known as “MC DAVO,” was born in Monterrey, Mexico; from a very early age he demonstrated his passion for music. In 2011, he debuted his first album “Psicosis 1” and in 2014 became part of Warner Music with the new album “El Dominio.” MC Davo is well known for his hard work, discipline and consistency. Today, he is known as one of the most important rappers in Mexico. Now, he is promoting his most recent single “Sigo Esperando Que Vuelvas” featuring “Santa Fe Klan.” The single can be found at the TOP 100 in Spotify Mexico and continues to rise. In July 2022, he will begin his US show tour with Santa Fe Klan.

Dharius
2M Instagram https://www.instagram.com/dharius_bodharius
2.6M YouTube https://www.youtube.com/c/DhariusOficial
2.3M Facebook https://www.facebook.com/Dhariuseloriginal
2.7M Spotify https://open.spotify.com/artist/66RfYVdftqnuHRicyClgL0?si=G_cfxSnYSKianhTChkOndg
Dharius is a renowned Mexican hip-hop artist who began his solo career in 2014 after separating from one of the best-known groups within the national hip-hop circle. His first solo album Directo Hasta Arriba was one of Dharius’s most ambitious projects since he already intended to have material with his own label and style. Mala Fama / Buena Vidha is his second studio album, which was released after the release of the successful singles “Te Gustan Malos,” “Me Voy a Poner Bien Loco,” “La Durango,” and “Hey Morra.” Themes that stood out not only for their music and lyrics but also for their videos have given much to talk about. “Hey Morra” today has more than 40 million views, and “La Durango” has already exceeded 100 million views on its official YouTube channel. He recently launched his Hip Hop label and his creative duo and producer Mauricio Garza: EL CLAN RECORDS. Same where he has been editing his most recent hits: “Espejismo,” “Todos en La Cuadra Bien Locos,” a hip hop anthem for his generation, which unites 4 of the greatest exponents of Mexican hip hop: CKan, Gera MX, Santa Fé Klan, and Neto Peña.
+ Google Calendar+ Add to iCalendar