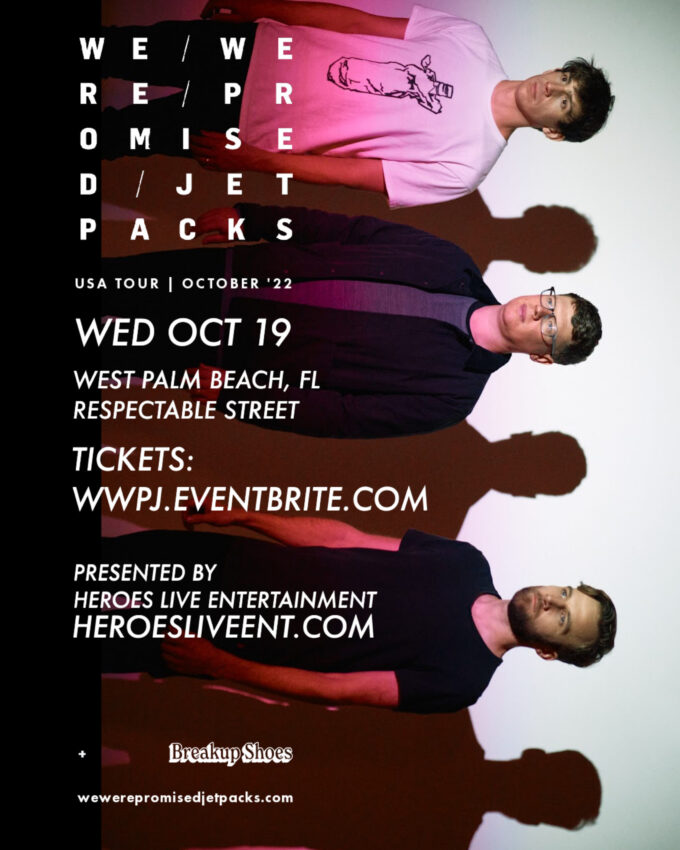 The frothy melodies, spiraling guitar riffs, and catchy refrains of this newfound aesthetic suits the band well and make Enjoy the View one of the year’s more stimulating aural
experiences. – Under The Radar

Single “Fat Chance” reveals a surprise partway through, emerging as an anthem about overcoming long odds, doing “a complete 180” and climbing out of the ruins, stronger than ever. – NPR Music

Scottish post-punk outfit We Were Promised Jetpacks’ fifth album Enjoy the View is many things at once: A quiet rumination on past relationships, a strain of optimism for the future, an ode to open-road guitar music and a nod to the band’s best-known, angular musicianship and intense live shows. – Atwood Magazine

Since releasing 2018’s ‘The More I Sleep The Less I Dream’, We Were Promised Jetpacks’ Adam Thompson, Sean Smith, and Darren Lackie have embraced change head-on. Amicably parting ways with guitarist Michael Palmer, leaving a notable empty fourth corner in their practice room, it marked a transitory moment in the band’s acclaimed career and one that would be cemented by events to come.

Entering 2020 as a trio with a handful of songs written and a small tour under their belts, the world around them came to a sudden halt. Yet despite the unquestionable hardship that the lockdown brought with it, for a band looking to rebuild following a dramatic change, it also proved to be a blessing in disguise.

“I guess it ended up being a lot more collaborative between the three of us,” Sean notes of their fifth studio record, ‘Enjoy The View’. Unable to meet in person, the album began to take shape across countless files bouncing back and forth between their respective Edinburgh homes. As well as providing the space to think more broadly about their own roles in the band, isolation also allowed them to approach their collective sound in new ways.

“If you’re trying to write a part when two other people are smashing their instruments it’s not the easiest thing,” Adam laughs. “Writing remotely, you could mute parts and work on things in your head. It just gave us a bit more creative freedom to try different things.” For Darren, separated from his kit, drumming became an entirely digital venture. “I could be a bit freer,” he notes, immediately backed up by his bandmates. “It was nice for Darren to have the space to try something he normally couldn’t,” Adam smiles, celebrating the opportunity for the trio to switch up their songwriting process.

With the space to focus on the structure of the songs over what is immediately possible in a practice room, the band shifted gears. “We’ve always considered ourselves a live band more than a studio band,” Darren notes, explaining how the past twelve months have forced a change. “This was more about focussing on making a really great album rather than thinking about how we play it live. Let’s make an album that’s just slightly different for us.”

The result, ‘Enjoy The View’, is also the product of a more settled band. Fifteen years into their career, the trio is more focused than ever. “We are doing this for ourselves and the people who like our music and get something out of it,” Adam gleams, “I’m really excited about being able to show them the new record.”

“I’ve had a really nice time writing this album,” he states matter-of-factly, signaling his appreciation to his bandmates. “We’re all very appreciative of the people who are still listening to us,” Darren adds, “it pushes us to keep getting better”. Nodding to both the band and their ever-loyal fans, Adam agrees. “It is very much our band, and we do this because we can do it together.”

Emerging from the heyday of the Phoenix house show scene, Breakup Shoes’ intimate yet celebratory style derives from their DIY origins as down-and-out college roommates. Their earliest tracks gave a unique expression to the long Arizona summer through a crafty blend of west coast beach rock mellowed out by a bedroom pop charm, which quickly earned a cult following with debut EP Nicotine Dream. Their first full-length record, Unrequited Love (& other clichés), propelled the band to a national audience and earned them gigs with Soccer Mommy, Men I Trust, No Vacation and more. Follow up record So Money, Baby pairs Zawisa’s sweet melodies with a rich production style and brought the band their first full national tour with Summer Salt. Their most recent EP, 2021’s Narratives, finds the band in a smoother, more mature sound that matches Zawisa’s reflective lyrics, yearning for simpler times in complex tones. Breakup Shoes consists of Phoenix locals Nick Zawisa (lyricist/vocalist), Matthew Witsoe (drums), John MacLeod (guitar/bass), and Jake Peña (bass/guitar).