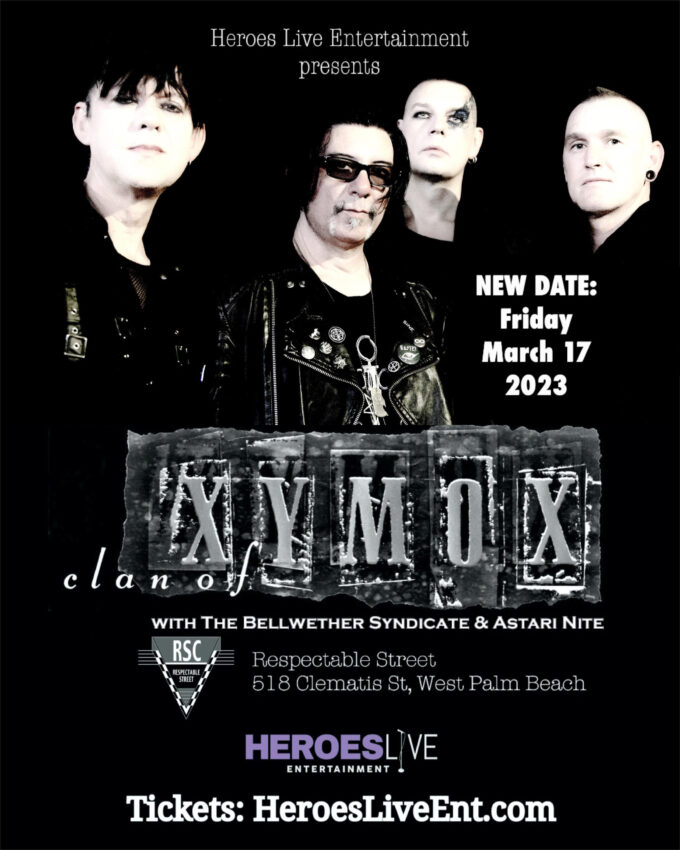 Due to the global surge of Covid, Clan of Xymox will be rescheduling their March North American tour to 2023.  Hold on to your tickets as they will be honored for the new date.

Since their formation in their native Holland, Clan of Xymox has been constantly changing, always challenging and often quite breathtaking. Formed in 80’s Amsterdam and signed to leading English independent label 4AD, home at one time to the Cocteau Twins, Dead Can Dance, and Pixies among others. The 4AD period saw the release of the band’s self-titled debut album and the second album Medusa. Those two records were full of tumbling electro beats, throbbing sequencers and moody vocals.

Clan of Xymox became one of the pioneers of the dark and moody electronic music that later became known as darkwave. Later they got signed to a subsidiary of Polygram USA. Their releases as solely Xymox were in a more synthpop/dance music vein. This period was known as their most commercial one, having dance chart hits in the USA.

In 1997, Ronny Moorings made the decision to restart Clan of Xymox and return to his musical roots in the Gothic electro scene. Since then, the band signed to USA based Metropolis Records, releasing a series of critically acclaimed albums.

The band has released 15 studio albums, 2 DVD’s, a remix and live album, “Best Of” and even a covers album. In 2017, “Days Of Black“ was released worldwide. It remains faithful to its roots and new-wave basis, but progressively evolved towards more melodic and harmonious songs.

Clan of Xymox have done what many similar bands fail consistently to do. They’ve upped their game, shaken things around, plunged back into the darkness and come up with something sounding fresh, original, and exciting. To the great enthusiasm of their fans, the band still tours with great energy worldwide on a constant basis. Current line-up consists of: Ronny Moorings, Mojca, Mario, Sean and Daniel.

Fronted by veteran artist William Faith (of Faith and the Muse) and Sarah Rose (aka DJ Scary Lady Sarah), The Bellwether Syndicate are, as illustrated by their debut, coloring outside of prescribed genre lines, choosing here to push the boundaries of style and substance into something relevant and vital.

While the music is written and recorded by William and Sarah, the live show features collaborators Philly Peroxide (keyboards/percussion), Paul Sin (bass) and Faith’s long-time drummer Stevyn Grey. The Bellwether Syndicate present a powerful and commanding live performance, where the sound and substance of the recorded work truly comes to life; where the art is made whole by the audience — and this is a band that knows how to connect with its audience: not a typical fan base, but an engaged and invested network of family and familiars spanning the globe.

Astari Nite crosses an obscure mix between gothic rock and post-punk, exploring themes of death, love and the occult.

Having performed alongside acts such as Peter Murphy, The Damned, Psychedelic Furs, She Wants Revenge, Cold Cave, Assemblage 23, Black Rebel Motorcycle Club, Modern English and She Past Away, they have established themselves as contemporaries of the GOTHIC ROCK scene.

Astari Nite has released two brand new singles so far in 2021 titled All Else is a Curse and Pocket Full of Posies and can be heard at https://astarinitengp.bandcamp.com